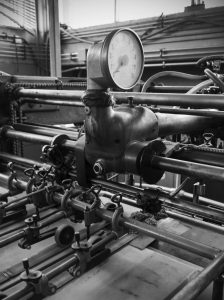 After a successful test of the Radio-Frequency Quadrupole Linac, RFQ, engineers and physicists from Lawrence Berkeley National Laboratory will be upgrading this superconducting linear accelerator. On its first trial run the RFQ accepted nearly 100% of the source beam without failure, a remarkable feat with so many complex control systems.

This upgrade plans to adapt the front end of the accelerator producing high-intensity proton beams for experiments.

The lab’s current RFQ, which sits at the beginning of the laboratory’s accelerator chain, accelerates a negative hydrogen ion beam to 0.75 million electronvolts, or MeV. The new RFQ, which is longer, accelerates a beam to 2.1 MeV, nearly three times the energy. Transported beam current, and therefore power, is the key improvement with the new RFQ. The current RFQ delivers 54-watt beam power; the new RFQ delivers beam at 21 kilowatts – an increase by a factor of nearly 400.